Many of you already know this but I haven’t made it blog-official yet. So…surprise, we’re pregnant!…and almost due! 😀 I’ve been telling myself to do a post (or several) on a pregnancy announcement, updates and experiences, however I have not had a chance to just sit down and write for months now though I had every intention to do so. But there’s no time like the present! So I’m going to break this announcement up into a couple parts, so you can get the full scoop on how life has been since we found out we are expecting our f i r s t baby, coming to the world early July 2017 ❤

part one: finding out

This was seriously the best feeling. Besides how I felt on our wedding day, and before that, when John asked me to marry him, and before that, him telling me he was going to move down to CA with me so I could go to grad school….ahem, well, we’ve had a lot of “best feeling” moments together 😉 But finding out you’re pregnant introduces a whole new human into your party of two, so I’d have to say that finding out we would be starting that next chapter was pretty intense and exciting.

^ Positive preggo tests!! I thought I would have to wait the full 5 minutes the box said it took to show the lines, but nope it swooshed right into that + symbol in 10 seconds before I could even stand up. I about died! And I screamed, and John burst in and we both started laughing and jumping up and down.

I had a feeling I was pregnant 2ish weeks before I took a test (by that point, I was already 3 weeks preggo). Your body just feels different, like there’s stuff moving around and making room, you’re not crampy, but everything feels funny! I knew almost right away, which was really fun for anticipation (haha not!). I wanted to wait to take a test until after we got back from New York/Pennsylvania for my younger brother’s wedding at the end of October. I knew if I took a test and it said positive before we left for that trip, I would not have been able to contain myself, and I didn’t want to say anything to my family until I knew for sure. That anticipation killed!! I took a test the night we got back home to our apartment, and sure enough… ++++++ ❤ John and I were pretty jet-lagged and sleepy so our emotions were a bit laggy when I showed him the tests. We both sat in the hallway against the wall for some time just laughing deliriously and babbling about becoming parents until about 1:30am, and then passed out in bed. We celebrated more so the next day 😉

This was a bit surreal for us, since all we knew was that there was sure enough a little squish growing inside my belly. We were so nervous and excited and giddy for this because it meant we would actually SEE our little bean and it would feel more real! I totally cried. John smiled the whole time. It was great ❤ The first trimester is always awkward because you know you’re pregnant but don’t feel it. You have to tweak your diet but not your clothes (yet), you feel sick but not sick enough to throw up (at least that’s how it was for me, thank goodness…weeks 5-9 I felt nauseous and then it went away for the most part. Thank you genetics!!!)..and that’s about it. Every ultrasound we’ve had after this one I was able to pull myself together enough to not cry, but it’s so hard because to know that a tiny human is growing inside your belly on its own is just so amazing and exciting and makes waiting for delivery that much harder! 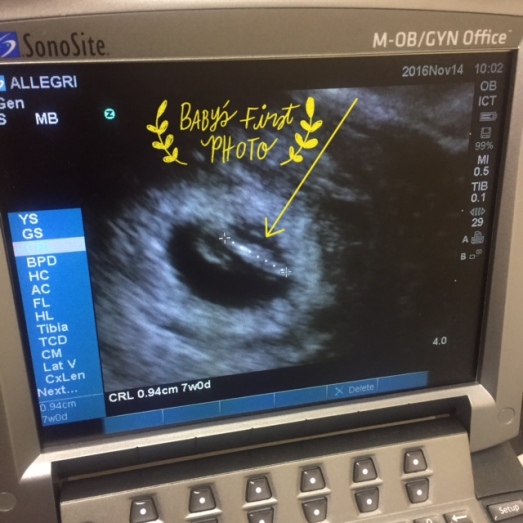 ^ definitely felt like a mom after I saw this photo on the sonogram. It’s real! There’s a thing growing in there!!

The first trimester went by so fast – I’ve really been looking forward to my second trimester, where all the fun begins and my energy was supposed to come back and my belly would finally pop. More about that in my next post about our pregnancy – stay tuned!

Sharing is caring! Spread the word:

One thought on “A 6-month late surprise”

My Mission: The Mini Apartment Blog exists to serve women during the most magical moments of your everyday. Here you will be inspired to live vibrantly, thrive throughout any season, and be intentional in all that you do + create.